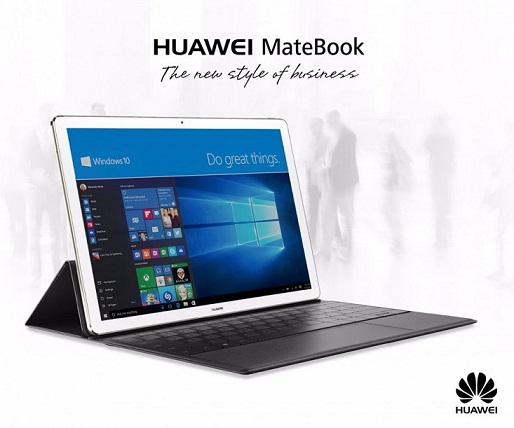 Huawei Pakistan has entered into the world of PC with an incredible hybrid PC as its first product. The leading technology master that has so far performed outstandingly in the field of innovative technology. First hybrid computer by Huawei is one of such great milestones achieved by the Company. The Matebook is specifically targeted to revolutionize the new business style. Huawei has crafted the Matebook with an ultra slim body design, ensuring the easy carrying of the device and making it as light in weight as it could be. However, the laptop offers a large display of 12-inch 2160 x 1440 IPS TFT LCD. This has strongly impacted the sales of the Matebook, taking the smart laptop concept to the whole new level.

Huawei Matebook supports a dual operating system for an excellent experience of high tech and supremely efficient performance. Both the Windows and Android system can be freely enjoyed by the users without any worry on the future Matebook. Windows 10 is also available as the installed operating system along with Andriod OS with EMUI. Furthermore, to make it more attractive and useful, Huawei has brought an idea of detachable keyboard for the Matebok. So the user can use the laptop or the tablet, whatever version of the product user like.

Huawei also provided a large volume battery in the Matebook that gives long hours to the machine on the battery power. The Matebook has a typical 33.7Wh (4430mAh@7.6V) battery. So the user can be anywhere on his job, project site, in travel or in a home without any worries of low power issues with this amazing invention of Huawei. This is the reason that Huawei has built an impression of trust and customer oriented policies while producing technology products. Huawei Mate 8 has celebrated by the customers so overwhelmingly that was actually not foreseen by the technology pundits even. Similar response can be expected for the Matebook when it reaches the market.