The wait is over to get know about best stuff of the year as Google has just released its  the “List of best going stuff on Google Play for 2014, and definitely in provisos of most downloaded content, it’s not so much distinct from that of Apple’s list. 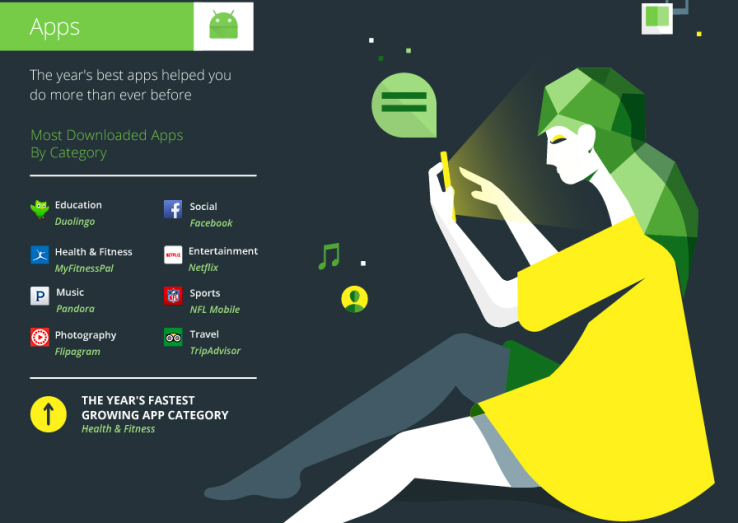 So concerning to list, Frozen, The Walking Dead, and Fancy by Iggy Azalea all positioned at the top of the list in their particular categories, though the app situation varied a bit from that of Apple’s list, which is due to an editorial decision as opposed to Google which focuses on downloads.

However, Google also mentioned  that Health and Fitness was the fastest growing app category.

Album of the Year: Frozen: Original Motion Picture Soundtrack
Song of the Year: Dark Horse by Katy Perry
Song of the Summer: Fancy by Iggy Azalea
Fastest Growing Genre: Soundtracks (fueled by Frozen, Guardians of the Galaxy, Despicable Me 2, The Lego Movie and The Great Gatsby soundtracks)

Some of the most read articles of 2014:
Flavorpill – 15 ’90s Teen Heartthrobs Who’ve Resurfaced on TV
Mental Floss – 50 More Awesome Facts (About Everything)
MarketWatch – 10 most miserable cities in America
Houzz – Bathroom Workbook: How Much Does a Bathroom Remodel Cost?
The Verge – The Verge Awards: the best of CES 2014

Books of the Year:
The Fault in Our Stars
Fifty Shades of Grey
Divergent
Twelve Years a Slave
Insurgent

So, Congrats to the folks who made it to the list!