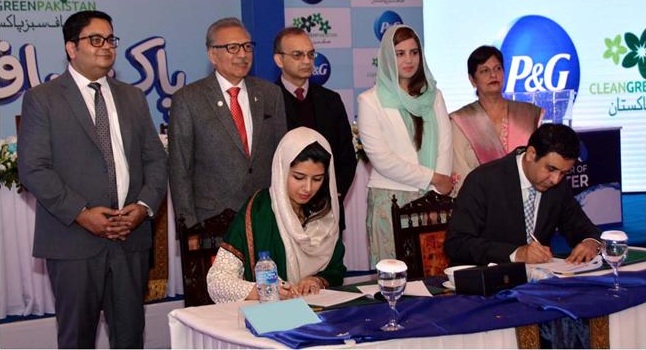 The President of Pakistan, Dr. Arif Alvi has said that safe drinking water and sanitation are the key priority areas of the ‘Clean Green Pakistan’ Movement.

The President further said on the occasion, “Ensuring the health of our people requires that we invest in adequate infrastructure to increase access to safe and affordable drinking water as well as sanitation facilities. It is also very important to create awareness about conservation of water, sanitation and good health and hygiene practices at the grass-root levels. P&G deserves to be commended for making continued efforts to help improve health and hygiene of Pakistani communities. The reach and impact of its programs to date and P&G’s continued commitment towards this cause will continue to make a meaningful difference in the lives of the Pakistani people.”

P&G Pakistan has announced commitments for its Paak Saaf Pakistan initiative over the next three years. Under this, it will  i) provide 50 million liters of clean drinking water, helping an estimated 250,000 people in need via its Children Safe Drinking Water program and ii) create cleanliness and hand-washing awareness amongst 5 million children via its Safeguard School Education Program.

The announcement was made by Sami Ahmed, Vice President P&G Pakistan, at a local hotel in Islamabad. Ms.  Zartaj Gul, Minister of State for Climate Change was the Guest of Honor. P&G was joined by its community partner HOPE, represented by Chairperson, Dr. Mubina Agboatwalla, for the third consecutive year leading up to World Water Day, to raise awareness about the clean drinking water crisis and help save lives through the P&G Children’s Safe Drinking Water Program.

An MoU was also signed between the Ministry of Climate Change and Procter & Gamble Pakistan on this occasion, reiterating P&G’s commitment to play an active role in supporting the ‘Clean Green Pakistan’ campaign to achieve shared goals.

Minister of State for Climate Change, Zartaj Gul shared her views, “Only together can we create a strong positive impact. It is deeply encouraging to note that Procter & Gamble Pakistan has been dedicated to the cause of safe drinking water and health and hygiene awareness for over a decade and will continue to create further awareness about this cause. The powerful work undertaken via P&G’s Children Safe Drinking Water and its Health & Hygiene programs, will have a lasting impact on our society. I applaud and congratulate the company for its efforts and encourage other industry leaders to also play their part.”

Expressing his views, Sami Ahmed, Vice President, P&G Pakistan said “P&G’s Paak Saaf Pakistan umbrella brings together our efforts to help create a healthy and hygienic Pakistan through P&G corporate and brand community programs. In living up to our purpose of improving Pakistani lives, our community programs to date have improved quality of life for over an estimated 46 million Pakistanis.”

He further added, “I am pleased to share that today we celebrate a new milestone of delivering 15 billion liters globally through our Children’s Safe Drinking Water program fulfilling our global 2020 commitment a year early.”

According to Water Aid, in Pakistan around 22 million people do not have access to clean water and 19,500 children under 5 years of age die every year from diarrhea caused by dirty water and poor toilets.

P&G announced that it would also continue to play an active role in empowering children across the country to become health and hygiene champions. Safeguard’s “Healthy New Year 2019” campaign has educated young children on the importance promoting a clean, green country by engaging school children to conduct cleanliness drives across 10 major cities of Pakistan.

Since 1998, Commander Safeguard, Pakistan’s first super hero – has become an icon for children and has encouraged them to live a healthy lifestyle. In 2004, P&G launched the Safeguard School Education Program which has so far reached over an estimated 19 million children, creating handwashing awareness across the country.

P&G’s efforts in this area support the United Nations Sustainable Development Goal # 6 – to ensure access to water and sanitation for all. The company remains committed to expanding the reach of its programs in partnership with the government, NGOs, companies and consumers.